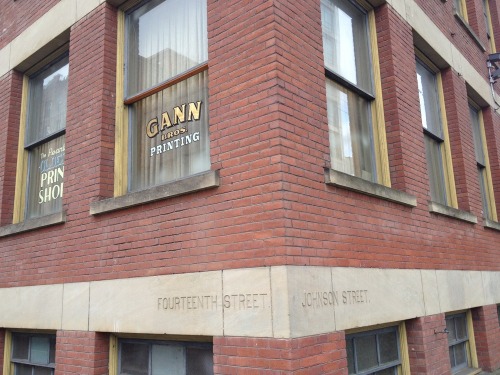 The Pearl’s Oldest Print Shop is exactly what I saw printed on the window when I happened to look up. I was walking down 14th Ave, just past Johnson, and I looked up. I read the sign, I walked 5 more steps and I stopped. I was looking for a printer. Could I just walk in off the street into this extremely old building and apparently extremely old print shop and say “Hi, I need some letterhead printed. Can you help make it happen? Oh and can you make it look like this business card I already have, but have no computer file for it’s likeness?” The notion seemed unlikely but I was in a rather optimistic mood that day and so I went in.
The main office was very nondescript, a dog was resting in the corner and a women was behind a desk. I simply told her what I was shopping for and she asked me if I could wait. Michael came out and within minutes of me reciting to him my needs he ushered me past the office and into the main belly of this old building. It was a cavernous room filled with so many large machines; I could only surmise they all played a distinct role in taking someones carefully thought out words and pictures, transferring them onto paper so others could receive, read and relish their thoughts and ideas. Michael listened to my needs, walked me through the print shop sharing with me his families roots and some of the history behind the print shop. As we walked he described what different machine’s did; we ventured downstairs to where pallets of paper where stored; I was given a short stack of 2 different weights of paper to take and test on my printer at home; we looked at color swatches to match the color on my already existing business card. Michael said without a doubt it would be no problem to make up letterhead from my existing business card! For me, a girl who’s captivated and charmed by local trivia and knowledge, as well as a  family story of innovation, perseverance and, in this case, ink under their fingernails – it was an hour thoroughly enjoyed. Gann Brother’s Printing and the building it’s housed in, has a “colorful” history and deep roots here in Portland, it’s a story worth printing. So here I go… Gann Publishing Company  is a third-generation print shop that was started when James Gann immigrated to Portland from Greece to meet up with his older brother and to hunt for Gold. The hunt for gold did not pan out very well so James studied printing at Benson High School. After graduation James went to work at his brother’s print shop, Gann Brother’s Printing. James’ son, Steven ( who is Michael and Christopher’s father), grew up in the printing business. Father and son would take the trolley to work where Steven would hand feed the the presses, while standing on an apple crate. Daily menu’s were printed for local restaurants and Steven would help with their delivery. When Steven grew up he also attended Benson High School and studied printing; next came college; after college came the Army; after the Army a Law Degree from Lewis and Clark. Upon completion of his law degree, Steven still had the urge to be a printer. Innovation set in. In those days, all the law briefs had to be taken to the printer so they all looked uniform. Gann Brother’s Printing grew to be Gann Publishing Company.
In 1965 the company moved from, what is now, the location of PSU’s library to their present day location at 1410 NW Johnson St. The Gann family has seen this area of Portland grow in ways many of us will never be able to identify with because we are such a transient society these days. We move for jobs; we move for weather; new surroundings, whatever the reason; but the truth is, very few of us stay in one location for our lives let alone the lives of three generations! Michael and his brother Christopher, third generation Gann brothers, are now running the business. Gann Publishing Company is their head company, out of respect for their father’s innovation, drive and years of commitment but Michael and Christopher have decided to go back to their roots and are operating as Gann Brother’s Printing. Their father (Steven), who is now 84 years old and suffered a stroke a a few years back, still comes into the shop everyday to listen to the machines whir and to keep an eye on his sons. Gann Brother’s Printing has a mix of traditional and modern equipment enabling them to place ink on paper using a variety of techniques, producing intriguing textures and designs honoring the craftsmanship of authentic printing. They can produce business cards to custom stationary packages. Foiling, embossing, letterpress printing, die cutting, full color work, flyers, newsletters- anything that can be printed! Any very often than not, Gann Brothers is more cost effective than say Kinko’s or Office Max. The benefits of being a third-generation, family owned business, in the same location for the past 50 years, is passed on to the customer. Translation: no mortgage payments, printing presses are free and clear and even more valuable is the experience and know-how of three generations.

Letterpress printing is the relief printing of text and images using movable block type and images or “cuts.” Gann Brothers is reintroducing their letterpress department to the neighborhood. With an inventory of nearly 1,000 vintage cuts of Old Portland, Ads and other funky finds they have also uncovered clip art from the early 1900’s. People may come down to Gann Brother’s and browse through the dies and choose what they would like printed. You choose the image, the text, the cut, the paper, the ink color!  The creative options are infinite! Thank You cards, save the date cards, wedding invitations, dinner party menus, birthday invitations, special occasion invitations, business cards, gift tags, customized stationary for friends as gifts, an assortment of custom crafted and designed cards would make a truly unique gift and would be a crafty person’s bliss to create! Gann Brother’s is open on First Thursdays. Visitors get a tour, some history and a box of Chiclets! Why Chiclets? The Building was originally build in 1909 as a factory for the American Chicle Company, which relocated to Portland after the San Francisco earthquake. Steven Gann purchased the building in 1965 and Gann Brother’s Print Shop has been running their presses there ever since. The Building is a National Historic Landmark.
“No job is too small” said Michael. “ If the light is on we are here, so come by.” Michael and his brother Christopher were raised in a time when you honored your word, you took pride in your work, you developed a connection with your customer and you wanted to please them. This is how Gann Brothers Printing is still run today.
Drop in for a quote, or browse through the trays of die cuts, perhaps an intriguing up-close look at true printing presses is what you’re after – it doesn’t matter, all those reasons are welcomed. Michael even says “Bring your kids, I’d love to show them around.” And I know he means it. 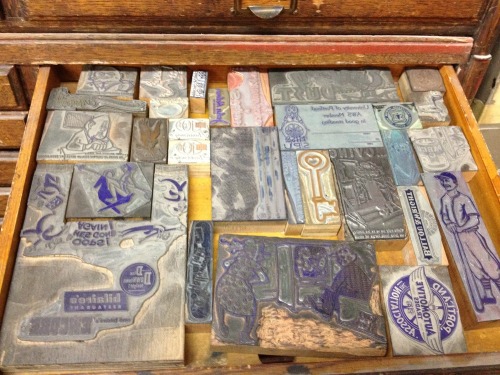 A sample of the over 1,000 vintage die cuts that can be used to make custom stationary, cards, tags – your imagination is the only limit! 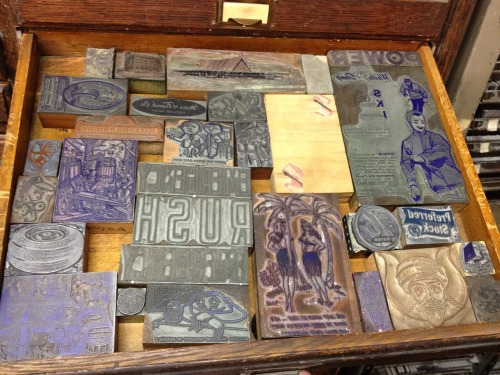 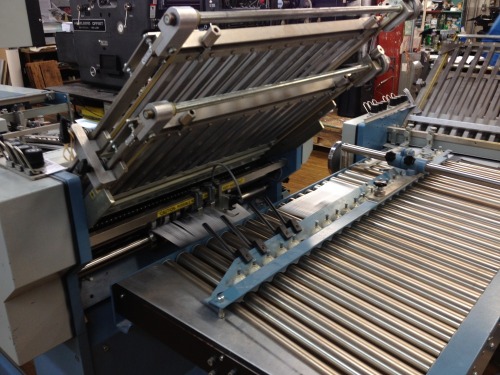 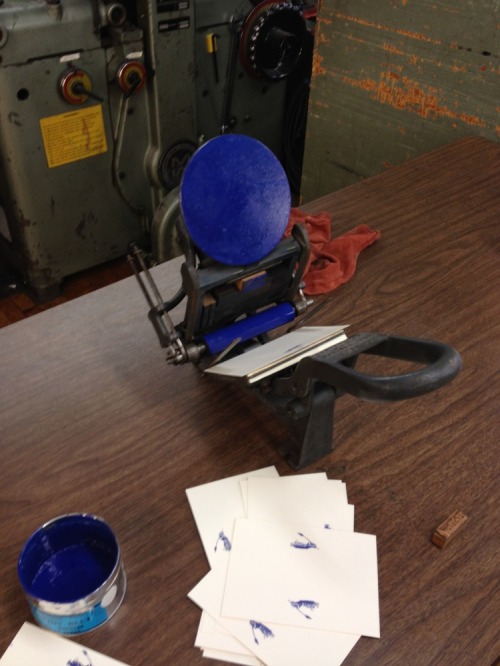 Some machines are simple enough for you to literally “handpress” your own cards! Pick an image, paper size, color and ink color – Michael will set it up and then allow you to do all the “handy” work!